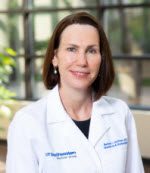 Dr. Barbara Hoffman agreed to serve as Editorial Review Group Chair for Obstetrics & Gynecology in January 2020. In just four months as chair of this heavily published specialty, we have sent her 34 books, and she and her reviewers already have submitted 21 reviews.

Dr. Hoffman is the Distinguished Professor in Obstetrics and Gynecology in honor of Dr. F. Gary Cunningham at the University of Texas Southwestern Medical Center in Dallas, Texas. She is an editor of several internationally recognized textbooks, as well as senior editor of Williams Obstetrics, 25th edition, Cunningham et al. (McGraw-Hill, 2018) and of Cunningham and Gilstrap’s Operative Obstetrics, 3rd edition, Yeomans et al. (McGraw-Hill, 2017). She spearheaded initial development of Williams Gynecology (McGraw-Hill)and has served as senior editor of all four editions (2008, 2012, 2016, 2020). She functions as senior editor of these books’ websites through McGraw-Hill’s AccessMedicine and AccessObGyn. She has also cowritten multiple study guides in obstetrics and gynecology, which complement both Williams books.

Dr. Hoffman is a member of the American College of Obstetricians and Gynecologists’ task force to improve maternal care. As a surveyor in the Texas State Levels of Maternal Care program, she participates in physical surveys to evaluate care and clinical practices in obstetrical units across the state, with the goals of sharing best practices and improving maternal care delivery.

Clinically, Dr. Hoffman works at Parkland Memorial Hospital in both labor and delivery and in the obstetrics and gynecology emergency services units. Through this work, she has received the university’s Socrates Award for outstanding teaching twice. Her in-the-trenches work with residents in training provides ample opportunity to identify critical teaching points. These pearls prompt continuing evolution and improvement of the textbooks she helps write.