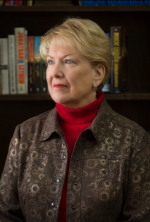 As one of our longest-serving and most loyal Editorial Review Group Chairs, Dr. Marilyn Rantz coordinates reviews of books in the nursing specialties of Long-Term Care and Geriatrics. She started in 1997 as Chair in Long-Term Care, adding Geriatric Nursing in 2009, before stepping away in 2014. However, when her successor wished to step down at the beginning of this year, Dr. Rantz agreed to reassume the position, much to our delight. In the 18-plus years she has served, we’ve sent her 196 books and she has organized reviews of 138 of them, calling on 23 faculty at her institution.

Dr. Rantz, Professor Emerita of Nursing, has been affiliated with the MU Sinclair School of Nursing (MUSSON) since 1992. She held the named position of University Hospital Professor of Nursing, has an appointment as Professor in MU’s Department of Family and Community Medicine, was designated as a Helen E. Nahm Chair with MUSSON in 2008-2015, and was awarded the prestigious University of Missouri Curators’ Professor Title in 2010. In 2012, she was elected into the highly-respected National Academy of Sciences (formerly the Institute of Medicine), and also became the only individual to be twice named as an Edge Runner by the American Academy of Nursing for two different innovations; 2008 for Aging in Place and TigerPlace and 2012 for the Quality Improvement Program for Missouri (QIPMO).

Dr. Rantz has sustained a research program to improve the quality of care of the elderly. Her innovative work in nursing home quality spans many years, in practice and as a leading researcher, establishing herself as an international expert in quality measurement in nursing homes. In 2012 and 2016, she secured $14.8 million and $19.8 million grants, respectively, from the Centers for Medicare and Medicaid Services (CMS) for their Initiative to Reduce Avoidable Hospitalizations among Nursing Facility Residents – Phase 1 and Phase 2; two of the largest received across all University of Missouri campuses. In total, Dr. Rantz and her multidisciplinary research teams have garnered nearly $84 million in funds to support work measuring the effectiveness of nurse care coordination and conduct cutting-edge research in long-term care, new delivery models of care for older adults, and technology development to enhance aging in place of community-dwelling elders.