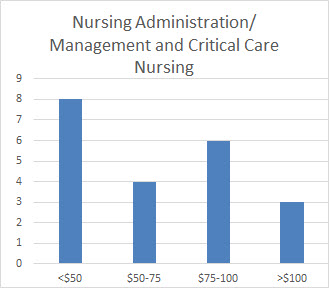 Over the past year, we have received 16 titles in Nursing Administration/Management from seven publishers and we have published reviews of 12 of them to date. During the same period, we have received five titles in Critical Care Nursing and have published reviews of three of them. These 21 titles range in price from $34.95 to $124.99, for an average price of $70.36. Doody’s Core Titles 2017 has 14 titles in Nursing Administration/Management, five of which are Essential Purchase titles, from seven publishers. There are 19 Critical Care Nursing titles on this year’s DCT list, from six publishers. Of those, four were designated Essential Purchase titles.