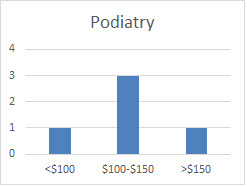 Over the past year, we have received five titles in Podiatry, three of which have been reviewed, with two currently out for review. These titles range in price from $79.99 to $199.00, for an average price of $125.40. Doody’s Core Titles 2016 has 14 titles in Podiatry, with three designated as Essential Purchase titles. Six of the titles are published by Wolters Kluwer, while the remaining eight are published by six different publishers.