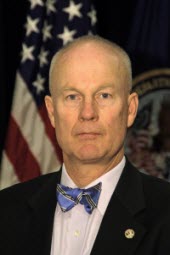 For more than 13 years, Dr. Tom Pierce has served as Editorial Review Group Chair for Doody’s Review Service in Occupational and Environmental Medicine. Since November 2003, we have sent him 165 books in the specialty and we have published 121 reviews, all but one written by him.

Dr. Pierce has enjoyed an eclectic career in occupational health and preventive medicine that began in 1975. His contributions are diverse, and include a career in academia and in the United States Navy. His focus has been on toxicology and industrial hygiene applied to both military and industrial populations.

A Fellow of the American Industrial Hygiene Association, he was honored with its Rachel Carson Environmental Leadership Award in 2012. In addition to reviewing for Doody’s Review Service since 2003, he has also authored a continuing education column known as the “Action Level,” published monthly by the Journal of Applied Occupational and Environmental Hygiene and its predecessor journals since 1985.

He is the author of three books: Study Guide: Fundamentals of Industrial Hygiene (NSC 1989), Industrial Hygiene Program Management (ACGIH 1999), and his personal account of life on the wards of African hospitals (Hospital Safari, 2006).

His final federal assignment was as Chair of the Spinal Cord Injury Research Program, Congress of the United States of America (2009-2011). He is an active medical inventor and has created several devices useful to infection and air pollution control efforts. A member of the United States Military Endurance Sports team, he has medaled at both national and world master’s competitions in biathlon, triathlon, and snowshoeing.