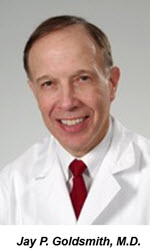 Since 2002, Dr. Jay Goldsmith has served as Editorial Review Group Chair for Doody’s Review Service, first in Pediatrics and, more recently, in Neonatology. We are indebted to him for his service for the past 14 years, during which time we have sent him 440 books and he has overseen 326 reviews, written by him or by one of the 64 expert reviewers he recruited.

Dr. Goldsmith has over 39 years of clinical experience in neonatology. After 30 years as an active clinician with the Ochsner Clinic in New Orleans, where he served as Chairman of the Department of Pediatrics for 22 years, he joined the faculty of Tulane University in 2012 as a Professor in the Department of Pediatrics. In 2013, he was named the section chief and Elsie Schaefer Chair in the Section of Neonatology.

Dr. Goldsmith is a diplomate of the American Board of Pediatrics and is board certified in neonatal-perinatal medicine. He has been actively involved in perinatal education and has special interests in the areas of neonatal resuscitation, ventilation of newborns, performance improvement, and neonatal ethics. As a member and then cochairman of the Neonatal Resuscitation Program (NRP) Steering Committee (1998-2009), he helped write and publish the fourth and fifth editions of the NRP textbooks. He now continues as a U.S. representative to the International Liaison Committee on Resuscitation (ILCOR). He played a major role in the development of a high fidelity neonatal mannequin (SimNewB®) to teach neonatal resuscitation by simulation. As consultant and faculty for the Vermont Oxford Network (VON) Quality Improvement Collaboratives, he has focused on improving respiratory care outcomes. He is the originator of the “Oxygen With Love” (OWL) Program, which has been successful in reducing the incidence of retinopathy of prematurity in many hospitals.

Dr. Goldsmith’s publications include over 100 scientific articles, 25 book chapters, and five editions of the textbook Assisted Ventilation of the Neonate. He was the 2012 recipient of the Southern Society of Pediatrics Educator of the Year Award and in 2014 was appointed to the AAP Committee on the Fetus and Newborn (COFN).