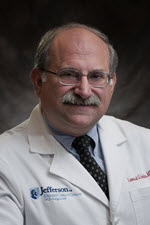 Dr. Leonard Gomella began his tenure as Editorial Review Group Chair in Urology for Doody’s Review Service exactly seven years ago, in the summer of 2008. Since then, we have sent him 256 books and he has overseen reviews of 175 of them, written by 64 experts in the field. Although many of his reviewers are colleagues from his department, he also has recruited reviewers from 22 institutions around the country as well.

Dr. Gomella is the Bernard W. Godwin, Jr. Professor of Prostate Cancer and Chairman of the Department of Urology at the Sidney Kimmel Medical College at Thomas Jefferson University in Philadelphia. He is also Director for Clinical Affairs for the Sidney Kimmel Cancer Center. Originally from New York, Dr. Gomella completed medical school, general surgery and urology training at the University of Kentucky in Lexington. After a Urologic Oncology Fellowship in the Surgery Branch of the NCI, he joined the Jefferson faculty in 1988 and was appointed Chair in 2002.

Dr. Gomella is involved in translational basic science and clinical research for prostate, bladder, and kidney cancer through the Sidney Kimmel Cancer Center. He has given over 500 presentations nationally and internationally and written over 400 papers, chapters, and monographs in the field of urology. He is Editor-in-Chief of the Canadian Journal of Urology.

Dr. Gomella has authored and edited 63 editions of 17 different books for medical students, residents, and practicing physicians. He is the Editor-in-Chief of The 5-Minute Urology Consult (Wolters Kluwer). Recovering from Prostate Cancer, the first book for the public dedicated to prostate cancer, was authored by Dr. Gomella in 1993. In the field of medicine, he is known for the Clinician’s Pocket Reference (McGraw-Hill) and the annual Clinician’s Pocket Drug Reference (McGraw-Hill).

Best Doctors in America®, America’s Top Doctors for Cancer, and others have recognized him for many years for urologic oncology. Men’s Health Magazine listed Dr. Gomella as one of the 20 top urologists in the U.S. He has received numerous awards from the National Cancer Institute, American Cancer Society, and the American Urologic Association. He is a member of the American Association of Genitourinary Surgeons and the prestigious Clinical Society of Genitourinary Surgeons. The University of Kentucky College of Medicine recognized him with a Distinguished Alumnus Award in 2009. In 2015, he became President of the Society of Urologic Oncology. Jefferson will honor him with the Jefferson Achievement Award in Medicine at their 2015 gala.