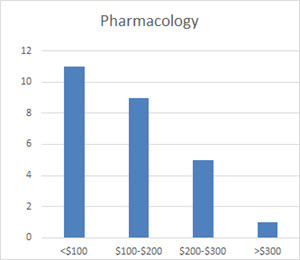 Over the last 12 months, we have received 26 titles in Pharmacology from 9 publishers and have published reviews of 16 of them. Most of the titles we received were published by Elsevier, Wiley-Blackwell, and McGraw-Hill. An almost equal number of Pharmacology titles – 24 – appear on the recently published Doody’s Core Titles 2015, with 6 designated as Essential Purchase titles. Prices of the 26 titles we have received over the past year ranged from $34.99 to $324.95, with more than half costing more than $100.00, for an average price of $140.06.