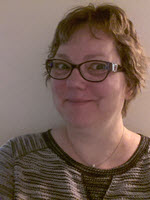 Theresa M. Bacon has served as Editorial Review Group Chair for Oncology Nursing since 2008. We have sent her over 115 titles, and she has organized reviews of 79 of them with more in process. She has accomplished this by recruiting 20 reviewers, although she reviews some titles herself.

Ms. Bacon received her BSN in 1994 and her Masters in Nursing Education in 2008 from the University of New Mexico College of Nursing in Albuquerque, New Mexico. She is certified in pediatric nursing (CPN), pediatric hematology and oncology (CPHON) and in nursing education (CNE) and spent most of the last decade as a Unit Based Educator on the Pediatric Special Care Unit at the University of New Mexico Children’s Hospital.

Currently, Ms. Bacon acts as adjunct faculty at the University of New Mexico College of Nursing and Santa Fe Community College in Santa Fe, New Mexico. In her role as adjunct faculty, she has shared her expertise in pediatric and oncology nursing as clinical instructor for more than 500 nursing students. She has taught numerous online prerequisites for nursing in addition to teaching the pediatric nursing didactic for the past four semesters at Santa Fe Community College. She frequently guest lectures on pediatric and oncology topics at all levels in the nursing curricula at the University of New Mexico and Santa Fe Community College. In October 2014, Ms. Bacon received the NM Nursing Excellence award for Education, Academia and Research. This was her third nomination for this honor.