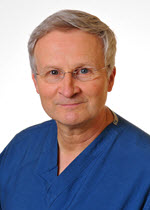 One of our first Editorial Review Group Chairs, Dr. David J. Dries, was among only the few who received our very first shipment of books on February 29, 1993, and he is the only one of that elite group who is still getting books reviewed 22 years later. During that time, we have sent him 833 books in his two areas of Critical Care and Trauma Surgery, and he has gotten reviews of 739 of them, an astounding 89 percent of the total. Although over time he has recruited 35 others to review, the vast majority of the reviews, 681, have been written by him.

Dr. Dries is a Trauma, Burn and Critical Care Surgeon and has been at the University of Minnesota and Regions Hospital in St. Paul, a Level I Adult and Pediatric Trauma and Burn Center, since 1999. At the University, he is Professor of Surgery and Anesthesiology and the John F. Perry Professor of Trauma Surgery. He is also an adjunct Clinical Professor of Emergency Medicine. At Regions Hospital, he is the Division Head for Surgery and has opened the present SICU and Cardiovascular ICU. He is now participating in development of a focused Neuro- ICU.

His research interests include respiratory mechanics, gas exchange, and hemodynamic response to mechanical ventilation and intra-abdominal hypertension. Much of his work is published in Critical Care Medicine, the Journal of Trauma and Acute Care Surgery and the Journal of Burn Care and Research. Dr. Dries serves on the editorial boards for these journals as well as Shock, Respiratory Care and the Scandinavian Journal of Trauma, Resuscitation and Emergency Medicine.