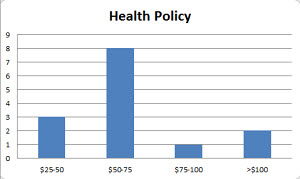 As a rule, we receive 15 to 20 titles each year in Health Policy and the related nursing specialty of Health Policy/Reform, and this past year was no exception. Over the last 12 months, we received 15 titles from seven publishers and have published reviews of 11 of them. Most of the titles were published by Jones & Bartlett, Oxford University Press, and Cambridge University Press. Despite the relatively small annual output of titles in these areas, a total of 20 titles were selected for Doody’s Core Titles 2014 in Health Policy and Health Policy/Reform, with seven from Jones & Bartlett. The cost of the titles we received in these areas in this past year ranged from $29.99 to $189.00, for an average price of $74.87.