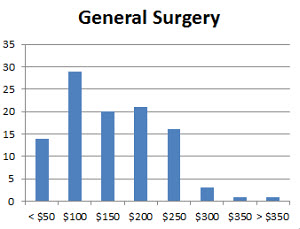 Over the past year, we have received 105 titles in the surgery subspecialty areas designated by the American College of Surgeons as General Surgery – our categories of General Surgery, Gastrointestinal Surgery, Endocrine Surgery, Oncologic Surgery, and Trauma Surgery. Springer accounts for 57 titles, while the remaining 48 titles represent 14 different publishers. So far, we’ve received reviews of 52 titles, with reviews pending on 17 others. Prices of these General Surgery titles range from $24.00 to $355.00, with more than half listing for more than $100.00, for an average price of $138.23. Doody’s Core Titles 2014 includes 105 titles in these General Surgery specialties (not the same 105 we received over the last year), including two authored by Dr. Carol Scott-Conner, whom we profile this month. Librarians designated 16 of the titles as Essential Purchases.