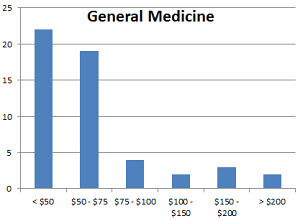 The 52 titles we’ve received in General Medicine over the past 12 months are spread among 16 publishers, led by McGraw-Hill with nine titles. So far, we’ve received reviews of 42 of the 52 titles, with an additional six currently out for review. Prices of those titles range from $10.95 to $240.00 (although only seven titles list for more than $100.00), for an average price of $43.95. Doody’s Core Titles 2013 includes 42 titles in General Medicine, representing 12 different publishers. Librarians designated 13 of the 42 as Essential Purchase titles, including Harrison’s.