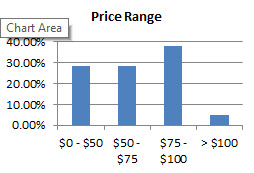 Over the course of the last 12 months, we have received 21 titles in Physical Therapy from eight publishers, and we have published reviews of 10 of them in Doody’s Review Service, with another five still out for review. Notably, three publishers are responsible for two-thirds of the titles – SLACK with eight, McGraw-Hill with four, and Lippincott Williams & Wilkins with three. Prices range from $29.95 to $115.00, for an average cost of $67.54. Doody’s Core Titles 2013 features 26 titles in Physical Therapy from seven different publishers. Interestingly, librarians have designated 13 of the titles, or half of the list, as Essential Purchase titles.