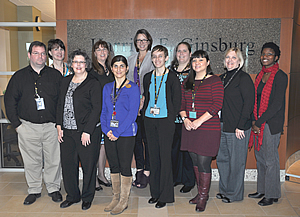 In 2012, on the heels of a third successful iPad deployment to incoming medical students, the Harriet F. Ginsburg Health Sciences Library joined with University of Central Florida College of Medicine faculty and its department of Knowledge Management to determine first-year medical students’ learning preferences. This project evaluated the instructional efficiency and students’ perceptions of three modalities of medical textbooks: interactive (“smart”) e-textbook, print, and online e-textbook.

Since 2010, the library had deployed iPads to all of its medical students. As the students use iPads throughout their curriculum, this comparative study was conducted to decide whether to adopt Inkling interactive textbooks. The study evaluated the instructional efficiency of interactive e-textbooks compared with print textbooks and noninteractive e-textbooks for learning gastrointestinal physiology. It also assessed student preference for different modalities of textbooks.

The 66 first-year students who volunteered for the study during orientation week were randomly divided into three groups as they entered the lecture hall and seated according to their assigned group. The study used a pretest/post-test comparison group design. Students answered 10 multiple-choice questions on their iPad using Question Mark software based on a single chapter of Ganong’s Review of Medical Physiology. Based on their assigned group, students read either the print version of the chapter, the Inkling version, or the e-book version from the health sciences library’s website. Students then took the same test again on their iPad.

Collected data was examined by analysis of covariance (ANCOVA). Data collected included: (1) time spent on instruction and solving test questions; (2) mental effort during instruction and test; and (3) students’ performance. Data on students’ perceptions were collected using a closed-ended questionnaire and two focus groups. An analysis of emerging themes was validated by data compiled from the questionnaire and focus groups.

The results showed that the medical students were overwhelmingly in favor of Inkling interactive e-textbooks over traditional print and online e-textbooks. No statistical difference was found in student performance based on these three modalities. However, students reported a higher level of motivation using Inkling because of its ease of navigation and access, self-assessment features, and its interactivity and search capabilities.

Based on the results of this study, combined with student focus group data, the library decided to purchase as many required first-year medical textbooks as were available on the Inkling platform. In 2012, the library purchased nine titles for first-year students and one title for second-year students. Titles included Bates’ Guide to Physical Examination and History Taking, Lilly’s Pathophysiology of Heart Disease, Junqueira’s Basic Histology, and Gilroy’s Atlas of Anatomy.

The positive responses from both students and faculty on the use of Inkling interactive e-textbooks led to a sharp increase in demand for the library to purchase additional Inkling titles. However, due to budget constraints, the library could not purchase every textbook requested for all 120 first-year medical students. Thus, the library team, along with key faculty stakeholders, created and implemented a rubric to be used in deciding which Inkling titles would be purchased.

In order to be considered for purchase, a title: (1) must be used across multiple modules in the MD curriculum; (2) must not be available on another electronic platform to which the library could subscribe; and (3) must take advantage of the interactive technology available on the Inkling platform (i.e., rather than just having plain text and no interactive content).

In August 2013, using this new rubric, the library purchased three titles for incoming medical students from Inkling. From this study, the library team learned that to assess and implement new learning modalities, it is important to involve key stakeholders, including faculty, library staff, and students.