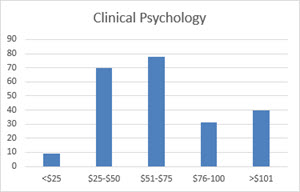 We have received 228 titles in Clinical Psychology over the past year from 15 different publishers, although the vast majority of these were published by just 4: Guilford, American Psychological Association, Oxford University Press, and Springer. Prices of these titles range from $14.95 to $395.00, but all except one are priced under $300.00, for an average price of $76.80. Doody’s Core Titles 2014 includes 28 titles in Clinical Psychology, with the list dominated by titles published by Guilford and the American Psychological Association.