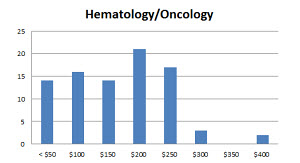 The 87 titles we’ve received in Hematology/Oncology over the past year came from 18 different publishers and cover a wide range of areas, including research, treatment, the role of nutrition, pain management, and communicating with patients. Prices of these titles range from $19.95 to $399.00, but almost two-thirds are priced more than $100.00, for an average price of $145.00. So far, Doody’s Review Service has published reviews of 25 titles, with another 21 currently out for review. The 28 titles on the Hematology/Oncology list for Doody’s Core Titles 2014 represent eight publishers, but just three (Lippincott Williams & Wilkins, Elsevier, and McGraw-Hill) account for 19 of the titles.